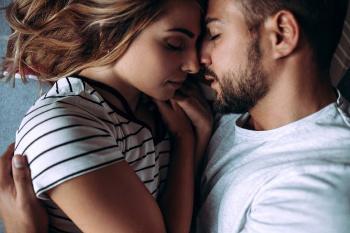 A hormone called kisspeptin might eventually be useful in the treatment of pychosexual and mood disorders, new research suggests.

The hormone could be involved with sexual behaviors, but more research is needed, scientists say.

Produced in the brain by the hypothalamus, kisspeptin triggers a series of chemical processes that ultimately results in production of the sex hormones testosterone and oestradiol and, in turn, the production of sperm and egg cells. It is sometimes called the “master regulator of reproduction.” (The hormone was discovered in 1996 in Hershey, Pennsylvania, home of the Hershey Company, which is known for its chocolate kisses candy.)

Researchers from Imperial College London wanted to know more about kisspeptin’s effects on the resting brain. “At rest” refers to times when the brain is not focused on a particular task.

Twenty-nine healthy men participated in the study, visiting a clinic twice. At the first visit, the men received kisspeptin intravenously. When they returned, they received a placebo infusion. In this way, the scientists could compare the results with and without the hormone. The men did not know whether they were getting the hormone or the placebo.

During both visits, each man went into an MRI scanner and watched a series of images. Some images were sexual (e.g., pornography), some were negative (e.g., a car crash) and some were neutral (e.g., a cup). The researchers observed the men’s brain activity during each image series.

The scientists discovered that kisspeptin increased activity in brain areas linked to sexual arousal. They also found that the men experienced less sex aversion during this time. Negative mood was decreased.

“Our findings suggest kisspeptin can actually influence entire networks of the brain…and this is linked to subsequent sexual and emotional function,” said lead author Dr. Alexander Comninos in a press release.

“Taken together, these findings provide the scientific basis to investigate kisspeptin-based treatments in patients with psychosexual and mood disorders, which are both huge health issues, and frequently occur together,” he added.

The study was published in October 2018 in JCI Insight.

Can Any Medicine Help With Peyronie's Disease?

If you have Peyronie’s disease, you’re likely all too familiar with the curved, painful erections it causes. Peyronie’s disease can hinder your self-esteem and your sex life, but it’s treatable. Find out if prescription XIAFLEX® is right for you.

Are You Suffering From Vaginismus?

Vaginismus commonly makes vaginal penetration painful or impossible. If you can’t have penetrative sex, use tampons, or get pelvic exams, you could be suffering from vaginismus. Learn more about it and find treatment here.