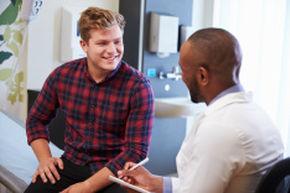 A pilot study investigating intralesional injections of hyaluronic acid for treatment of Peyronie’s disease has shown “encouraging preliminary results,” according to Italian researchers.

Peyronie’s disease is characterized by areas of scar tissue called plaques that form just under the skin of the penis. These plaques cause the penis to lose some of its flexibility. As a result, the penis starts to curve, making intercourse difficult or impossible. Many men experience pain as well. Scientists are not certain what causes Peyronie’s disease, but many believe it stems from a wound that is not healing properly.

The condition progresses in two stages: an early stage of active disease and a later stage when it becomes more stable. Surgery is one option for men who have been stable for at least a year.

Intralesional injections, which can be administered during the early stage, are another possibility. But they can cause side effects, including pain, swelling, and bleeding under the skin. They can also be expensive.

The research team investigated hyaluronic acid as an alternative. Past studies have shown that this substance can reduce scar formation and decrease inflammation. It is sometimes used in patients with osteoarthritis.

Sixty-five men between the ages of 23 and 70 took part in the study. All of the men had Peyronie’s disease. None of them had been treated with pills or intralesional injections before. The average time from disease onset to the study was 4.3 months.

For ten weeks, the men received weekly injections of hyaluronic acid. The researchers assessed the men’s plaques, curvature, and sexual experiences before treatment and again two months after the treatment ended.

Fifty-seven percent of the men saw the size of their plaques decrease with treatment. In another 37%, plaque size remained unchanged. On average, plaque sizes decreased from 10 mm to 8 mm.

Mean curvature was reduced by a mean of 10 degrees. Thirty-seven percent of the men had improvements in curvature.

While the results are encouraging, the authors emphasized the need for more research, pointing out that larger, randomized, placebo-controlled studies could provide more insight on the “real impact” of the treatment for early stage Peyronie’s disease.

The paper is currently in press for publication in Sexual Medicine.