Penile prosthesis or penile implants are devices placed inside the penis to allow men with erectile dysfunction (ED) to get an erection. The medical device which is implanted within the corpora cavernosa of the penis during a surgical procedure provides the highest levels of patient and partner satisfaction of all available treatment options. The device is indicated for use in men with organic or treatment-resistant impotence or ED that is the result of various physical conditions such as cardiovascular disease, diabetes, pelvic trauma, Peyronie’s Disease, or as the result of prostate cancer treatments. Penile implants are typically recommended after other treatments for ED fail.  There are two main types of penile implants, semi-rigid and inflatable. Each type of penile implant works differently and has various pros and cons.

With the semi-rigid or malleable rod implant, 2 matching cylinders are surgically implanted into the penis. To achieve an erection, you manually adjust the position of the penis. This implant provides enough rigidity for penetration and rarely breaks.

Advantages of the Semi-Rigid or Malleable Rod Implant Include:

The inflatable penile prosthesis consists of two attached cylinders — a reservoir and a pump — which are placed surgically in the body. The two cylinders are inserted into the penis and connected by tubing to a separate reservoir of fluid. The reservoir is implanted under the groin muscles. A pump is also connected to the system and sits under the loose skin of the scrotal sac, between the testicles.

To inflate the prosthesis, the man presses on the pump. The pump transfers fluid from the reservoir to the cylinders in the penis, inflating them and causing an erection. Pressing on a deflation valve at the base of the pump returns the fluid to the reservoir, deflating the penis and returning it to the normal flaccid state.

After a legacy of decades specializing in men’s sexual health, Coloplast is the trusted leader for erectile dysfunction solutions. The Coloplast Titan® penile prosthesis with reservoir is the only implant of its kind approved by the FDA for submuscular placement, which can lessen the risk of serious complications during and after surgery for some patients. 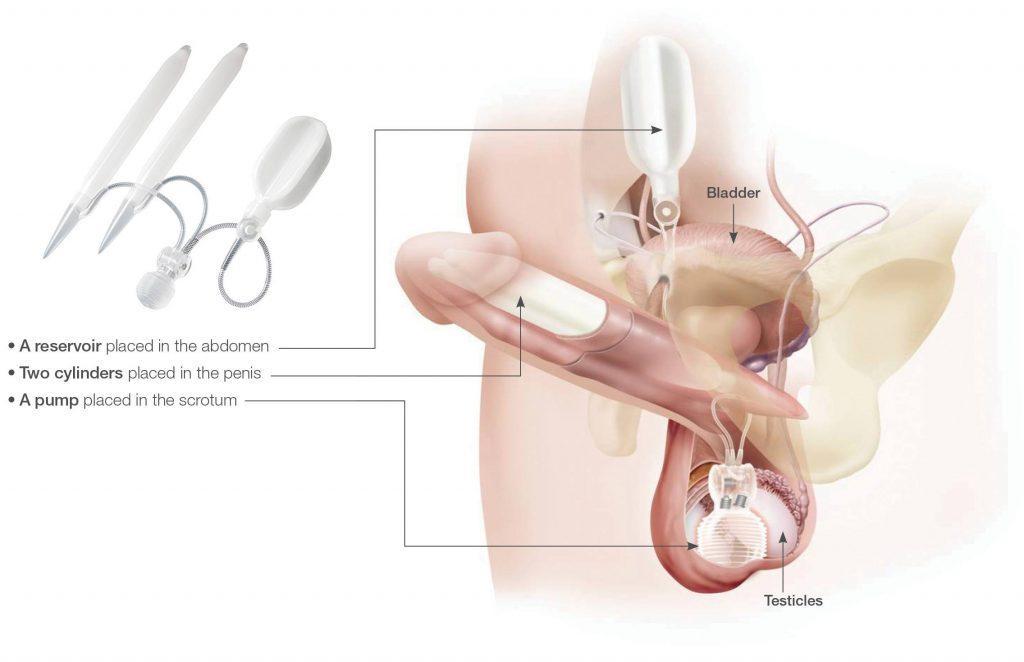 Reasons Why You Should Consider Having a Penile Implant

A Discrete Treatment for ED: A penile prosthesis is not noticeable when your penis is flaccid. Your partner won’t be able to tell you’ve had an implant to treat your ED unless you tell them.

Minimal Recovery Time: Every man is different, but a typical recovery time after a prosthesis implant procedure is four to six weeks. After you’ve fully recovered, you can begin enjoying sex once more.

Insurance Coverage: Penile implants are prescribed by a physician and are generally covered by most insurance plans, including Medicare.

As stated earlier, the placement of penile implants requires surgery. Before choosing penile implants, Dr. Shoengold will ensure your understanding of what surgery involves, including possible risks, complications and follow-up care.

Dr. Shoengold and Strumeyer are experts at performing these surgical techniques for both inserting and revising penile prosthesis.